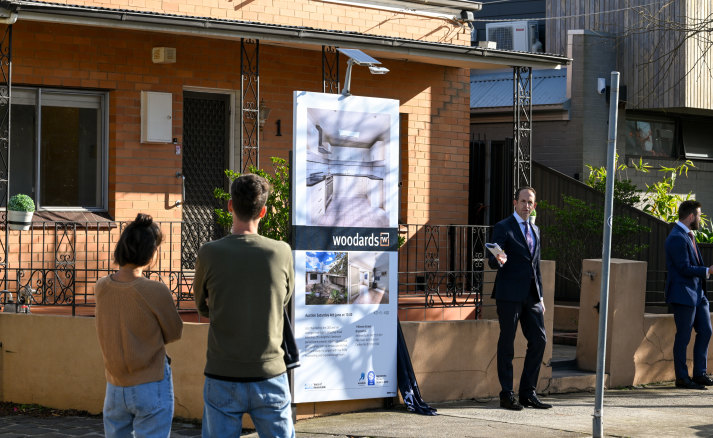 Melbourne’s auction clearance rate has edged below the key 60 per cent threshold in further evidence that property prices are starting to fall.

There were 1094 auctions scheduled in Melbourne on Saturday. By evening, Domain Group recorded a preliminary clearance rate of 58.4 per cent from 811 reported results, while 99 auctions were withdrawn. Withdrawn auctions are counted as unsold properties when calculating the clearance rate.

Melbourne home values edged down 0.7 per cent in May, CoreLogic research found this week. It comes ahead of the Reserve Bank meeting on Tuesday, when interest rates are likely to rise again, reducing potential home buyers’ borrowing power.

A classic Brunswick fixer-upper only managed to get five bids before it passed in on a $1.23 million offer under the hammer on Saturday morning, as rising renovation costs deterred buyers.

The four-bedroom property at 1 Minnie Street, complete with tiled floor, opened on a vendor bid of $1.2 million – the bottom of the $1.2 million to $1.3 million price guide – before two bidders tentatively raised their hands.

Bidders were keeping their cards close to their chests, not making any bids above $10,000, despite a crowd of more than a dozen including the home’s neighbours.

Brad Teal Woodards auctioneer Andrew Butler said that while buyers were interested, a rise in the cost of building or renovating a home was starting to hit properties that needed work.

“I definitely think some people are scared of how much building costs are today,” Butler said.

The fixer-upper, which was being sold as part of a deceased estate, will now be listed for private sale.

Not too far from Brunswick, in Collingwood, a unique warehouse home sold under the hammer for $1.845 million, above the $1.45 million reserve after six bidders fought it out.

The three-bedroom, double-storey property, at 75 Little Oxford Street was zoned both commercial and residential and sold to a buyer looking to make it a studio space as well as a home.

Jellis Craig Inner North partner and auctioneer Michael Amarant said the vendor had owned the property since the late 1990s, making it a unique home with an “alternative ’90s Collingwood vibe”.

Amarant said he was surprised at the result, but the property was so unique it was hard to put an exact price on.

“Everyone these days wants a warehouse shell to work with, but you really needed to do that back in the 1990s,” he said. “This was an opportunity to do that again.”

The auction market was proving to be a “feast and a famine”, Amarant said, with sought-after properties selling well even if they needed work, while others struggled to find buyers.

A neat three-bedroom Victorian terrace at 106 Charles Street, Fitzroy, in need of renovation found a buyer, after first passing in on a $1.31 million bid.

It sold after a short negotiation for $1.35 million to a man with two teenage sons and they plan to renovate it themselves.

“While the auction drew a reasonable crowd, there were a few people who didn’t get their hands up, resulting in an opening vendor bid at $1.3 million,” Depierre said.

The home had been owned by the vendors for 41 years. Depierre said it was their family home after they were first married, before it was rented out.

On the other side of the city, in Frankston, a home which did not need any work sold under the hammer for $1.255 million after three bidders – all young couples – competed.

The two-storey home at 15 Tara Drive sold above expectations after the auction opened with a bid of $1.15 million – the top of the advertised price range.

Ray White Frankston associate partner Brooke Wegener said the buyers, from nearby Langwarrin, plan to make the four-bedroom home their own. Like other bidders, they were looking for a new home after selling.

“For this particular property, all the bidders had already sold and had to buy, so there was definitely extra pressure on them,” Wegener said.

Waterson said there were buyers out and about, with more listings giving them more choice.

“I don’t think buyers are holding back at the moment, they are being more discerning with their choices.”

A family wanting a city bolthole snapped up a stylish double-storey apartment at 332/57 Spencer Street, Docklands, for $1.15 million.

The three-bedroom property in The Grand complex also sold in the middle of its price expectations of $1.1 million to $1.2 million.

The winners wanted a city base where their children could attend university without needing a long commute, and where they could base themselves, while the underbidders were from Sydney.

Minerth said though apartments had not been as popular as houses during the worst of the coronavirus pandemic, they were finding buyers again.

“Most apartments are selling, I sold a couple last week in Southbank and Middle Park, a lot of people are looking for city pads,” she said.

While interest rates are causing some buyers to pause, the end of Victorian government stamp duty exemptions at the end of June, may affect the inner-city market, as the program offers an exemption for brand-new properties listed for sale for more than 12 months after construction.

Property hunting? Our top pick of homes in Canberra's south to inspect this weekend