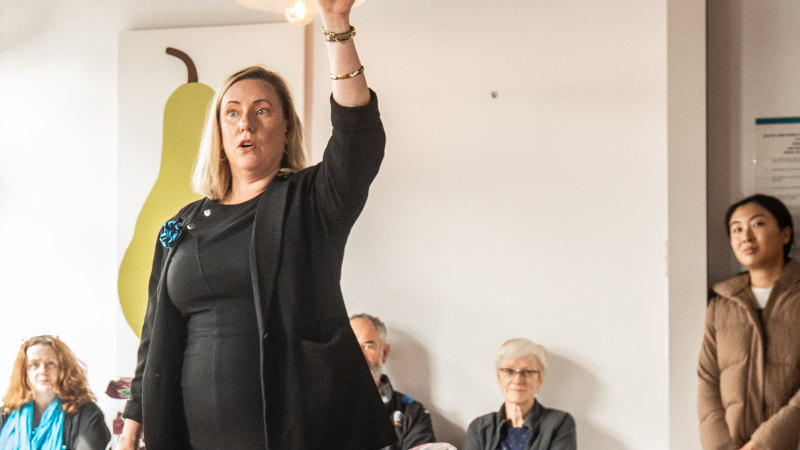 Bargain-hunting tactics proved fruitless at the auction of a West Melbourne warehouse conversion on Saturday, as interest rate rises weighed on home buyers’ minds across the city.

Despite a lowball initial offer for 11/11 Anderson Street, the two-bedroom apartment sold under the hammer for $930,000, within its advertised price range.

It was one of 768 auctions scheduled in Melbourne on Saturday. By evening, Domain Group recorded a preliminary clearance rate of 60.1 per cent from 539 reported results, while 58 auctions were withdrawn. Withdrawn auctions are counted as unsold properties when calculating the clearance rate.

But three bidders then fought it out in a fast-paced auction until the hammer fell at $930,000 to an owner-occupier, said selling agent Rhiannon East, of Harcourts Melbourne City.

She declined to disclose the reserve but called the sale “a slice of Melbourne history” that attracted mostly owner-occupiers.

“It’s nice to see it go to someone that is going to move in and enjoy it,” she said.

East said buyers had already factored this week’s interest rate rise into their decisions. On Tuesday, the Reserve Bank lifted the cash rate from 0.1 per cent to 0.35 per cent, the first hike in more than a decade and likely the first of several, which will reduce buyers’ borrowing capacity over time.

“Everybody that has been actively shopping is aware, and has been aware, of a potential interest rate rise over the past few months,” East said.

“Anything warehouse, unique, is still selling and selling well.”

In the south-east, a run-down two-bedroom house in Hughesdale sold for $1.201 million to buyers planning to knock it down and build a new home on the 531-square metre block.

He said there were plenty of buyers still in the market, although they were unforgiving if vendors’ expectations were too high.

“This market is still doing fine for properties that are priced well,” Grieve said.

“Buyers are definitely talking about [interest rates]. I don’t feel like we have lost buyers, I just feel like buyers move around the market in terms of price points … People are probably taking a more conservative approach.”

For example, a buyer who had a specific budget might now be looking at properties in the next-cheapest price bracket, he said.

Not all homes sold under the hammer. A Preston fixer-upper was still in negotiations on Saturday after passing in at auction.

The two-bedroom house at 27 Okeefe Street had three parties express interest prior to auction but it drew only one bid of $891,000 at auction, said Stockdale & Leggo Reservoir’s Paul Dines.

He was in talks with the bidder and expressed hope the home would sell soon, adding the vendors had set a $950,000 reserve but were open to talks.

“We are seeing, certainly, a softening – there is a softening in buyer expectations and participation,” Dines said.

“Auctions are less heated than three or four months ago. Quality properties are still selling but any vendor with expectations above the market is not getting sold.”

He said the interest rate rise might affect potential buyers who had not arranged finance, but anyone pre-approved would press on despite this week’s hike.

“A buyer that has had their finance approved, and deeply into the selling process, is not going to stop buying.”

Bidding began at $500,000 and three parties competed, until the first-time buyers beat out another party planning to knock the home down and rebuild.

“I wasn’t expecting anything near that, nor were the owners,” Calder Real Estate Agents’ Mohammed Safatli said, adding the vendors were hoping for about $550,000.

He was pleased to see the property sold to a home buyer who planned to restore it, and said there was more stock coming into a market where buyers were still active.

He said it was too soon to gauge the impact of the interest rate rise, but some buyers planned to wait and see what unfolded.

Business is hitting the 'burbs as office deals increase

Meet Capalaba, Brisbane: where properties sell faster than anywhere else in Australia