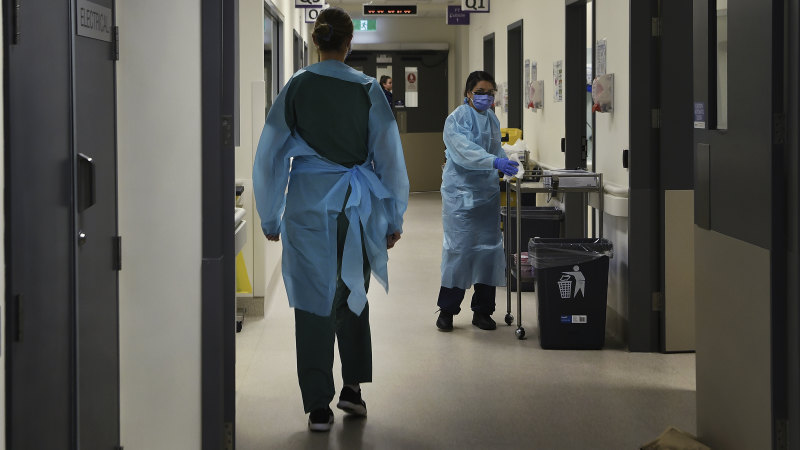 Rents have reached record highs in our biggest cities and many regional areas, leaving lower income earners and essential workers – many of whom are keeping the country going amid surging coronavirus case numbers – struggling to find affordable rental properties.

A comparison of Domain rental data and the latest employee earnings data from the Australian Bureau of Statistics, released on Wednesday, shows not one suburb in NSW or Victoria would be considered affordable for essential workers such as checkout operators, pharmacy sales assistants or kitchen hands.

Child carers, commercial cleaners and packers would also face slim pickings, with the cost of renting a typical home across any Sydney or Melbourne suburb likely to push them into rental stress – defined as when lower-income households put more than 30 per cent of their gross income towards housing costs.

Similarly, in Perth and Brisbane, not one suburb recorded a median rent that would be deemed affordable for such workers. Domain recorded median rental asking prices for suburbs with a minimum of 30 rentals over the year to December.

Rising rental prices across much of the country – which saw house rents in most capital cities hit record highs in the December quarter – were pushing essential workers further away from workplaces and into poorer quality accommodation, said National Shelter executive officer Adrian Pisarski.

“I think it’s a tragedy,” Mr Pisarski said. “All those professions on lower incomes or who have missed out on income because of the pandemic are in a genuine crisis, if not a catastrophe.

“They have to go for lower standard amenity, and further out, though even that has become more difficult over the pandemic,” he said, noting traditionally more affordable outer suburbs and regional areas had seen upward price pressure as those working from home seek more space.

Even the suburbs which recorded the lowest unit rents in NSW and Victoria last year, Birmingham Gardens in Newcastle (with a weekly median of $175) and Moe ($205) in Victoria’s Gippsland region, would tip a sales assistant into rental stress – based on the ABS figures on average weekly total cash earnings in May 2021.

Figures show nursing support or personal care workers, limited at spending $256 per week or 30 per cent of their earnings, could only afford to rent a typical unit in one Melbourne suburb, MacLeod ($245),14 kilometres north-east of the city. In Sydney, South Granville ($260), 18 kilometres west of the CBD, was the only suburb with a median unit rent to come close to the $259 limit that would stop aged or disabled carers going into rental stress.

Dual income households obviously have more choice, though it would still be a challenge to find an affordable rental for those on lower wages – with a growing number of suburbs slipping out of reach.

For instance, a nursing support worker and a commercial cleaner on combined weekly earnings of about $1525 – limiting them to less than $460 for rent per week – could look to a unit in Dulwich Hill ($450) in Sydney’s inner west, or a house in Scoresby ($450) in Melbourne’s outer east. However, renting a typical house in the likes of Umina Beach ($495) on the Central Coast, Claremont Meadows ($500) in Sydney’s west and Rye ($500) on the Mornington Peninsula – which were all in reach back in 2020 – would now place such a couple in rental stress.

Other key workers also have more options, though many are still limited to the middle and outer suburbs if renting on their own – which is an option many cannot afford.

A bus driver with a maximum budget of $353 per week could get a median priced unit in Liverpool ($350) in Sydney’s south-west, or a house in St Albans ($353) in Melbourne’s north-west.

Social workers and registered nurses would need rentals costing less than $440 per week, with units in Sydney’s Gladesville ($425) and houses in Beaconsfield ($435), 44 kilometres south-east of the Melbourne CBD, close to their 30 per cent threshold. Primary school teachers could spend up to $477, just getting them into a typical apartment in Crows Nest ($475) on Sydney’s north shore or a house in Burwood East ($475) in Melbourne’s outer east. Greater Melbourne’s median house rent of $445 would also be affordable.

Nicole Gurran, a professor of urban planning at the University of Sydney, said poor housing affordability meant a not insignificant proportion of key workers were living in overcrowded conditions, which had become a significant risk factor during the pandemic, as it made it more difficult for key workers – who typically cannot work from home – to isolate if they caught COVID-19.

“We know the trade-offs people make in an unaffordable rental market, either to live in inappropriate housing or to suffer a really high rental burden and often, unfortunately, it’s both,” Professor Gurran said, noting that moving further afield also increased the cost and time to commute to work, and could be harder for shift workers who could not rely on public transport.

On top of unaffordable rents, there was the difficulty of even being able to secure a property in the first place, with rental vacancy rates falling last year, and “heartbreaking” numbers of people seen competing for cheaper housing late last year, she said.

Farah Farouque, director of community engagement at Tenants Victoria, said there was a real mismatch between where affordable homes were located and where the bulk of jobs were. In addition to concerns about overcrowding, she noted there were reports of priced-out hospitality workers camping along the state’s surf coast, unable to keep up with rapidly climbing demand and rents during the pandemic.

Ms Farouque said tenants were entering year three of the pandemic with less support, despite ongoing financial pressure and the surge in coronavirus cases. While the Victorian government’s commercial tenancy relief scheme had been extended until March, applications closed this week for rent relief grants to support residential tenancies. Applications for the NSW government’s residential tenancy support package have also closed, while commercial support continues, and the federal government’s pandemic leave disaster payment has been reduced.

The pandemic has shown how dependent we are on the labour of essential workers, all three experts said, and highlighted the critical need to increase access to affordable housing close to jobs, public transport, schools and other amenities, rather than leaving key workers increasingly facing rental stress.

Her comments were echoed by Mr Pisarski, who also noted the need for tax reform, expressing disappointment that the Labor government had walked away from previous election policies to scrap negative gearing and make changes to the capital gains tax.

Insufficient supply of social and affordable rental housing was seeing more demand from lower-income workers in the private rental market, he added, while rapidly rising prices also meant more aspiring homeowners were also renting for longer – also often competing for cheaper properties while they saved for a deposit.

“[This means] those key workers … or anybody really earning under $60,000 a year in any industry is going to be squeezed,” he said.