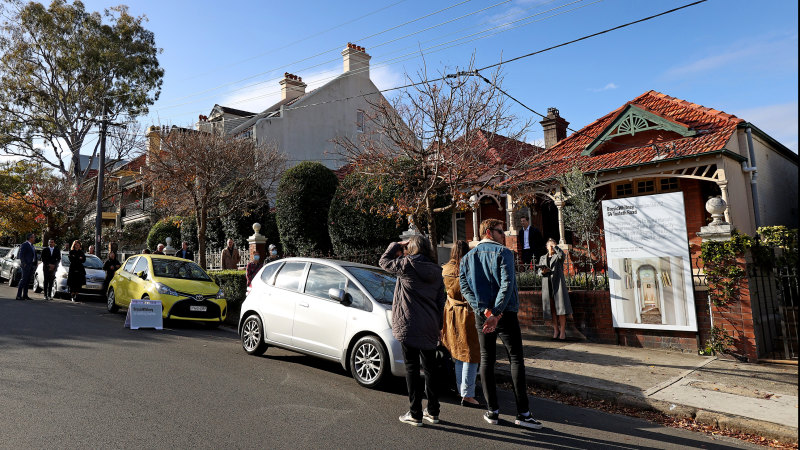 A local family has bought an original Victorian house in Glebe’s prestigious and highly coveted Toxteth Estate for $2,705,000.

Four parties, all locals, registered to bid on the dated three-bedroom house at 54 Toxteth Road, which had a price guide of $2.3 million and needed renovating.

It was one of 718 homes scheduled to go under the hammer in Sydney on Saturday. By evening, Domain Group recorded a preliminary clearance rate of 53.6 per cent from 476 reported results, while 134 auctions were withdrawn. Withdrawn auctions are counted as unsold properties when calculating the clearance rate.

BresicWhitney auctioneer Thomas McGlynn was met with silence for several minutes before bidding got under way with an opening offer of $2 million.

Every buyer ended up taking part in the auction, with bids rising in increments from $50,000 to $5000 towards the end.

It sold for $2,705,000 to a local homeowner, her brother and their mother, who bought it together as a family purchase. The reserve was $2.6 million, revised up from $2.5 million on the day.

Local buyer Kel Foster said they were “shell shocked” and “excited” to be the winning bidders.

“We love Glebe and we live in Glebe. We’re looking at my mum moving here, so it’s a really nice location, a lovely street, so we’re really happy,” Foster said. “There’s a lot of work to get done, but we’re ready for it.”

While she said they were not timing the market, she believed they got the home for a better price than they would have six months ago.

“It’s an empty-nest downsizing opportunity for my mum. A house like this only comes up every now and then. The current [market] situation probably didn’t have as much impact as it might of in a normal situation.”

BresicWhitney partner and selling agent Shannan Whitney said all four bidders had some sort of relationship with Toxteth Estate.

“That was the driver and trigger and the main pattern that came out of the sale,” Whitney said. “The Toxteth Estate is probably one of the prestigious and premium inner-city neighbourhoods.”

He said with properties at the upper end fetching about $12 million, this home’s price guide was a “very attractive” entry point.

“The conditions are very appealing and attractive for buyers – that creates opportunities that may not have been possible two years ago.”

In East Killara, a five-bedroom house at 113 Springdale Road sold for $5.32 million.

A dozen buyers registered to bid on the home, which had a guide of $4.5 million.

Auctioneer Clarence White of Menck White Auctioneers said it took about 35 minutes to sell under the hammer, with five of the bidders competing.

“The increments were good, but the pace was slow,” White said.

“That [result] is the exception and not the rule in terms of what we’re seeing at the moment. That auction was something we would have seen six months ago.”

He said buyers were cautious and circumspect about bidding as they anticipated prices to fall further in the months ahead. White declined to reveal the reserve.

The property sold through William Chan of Marshall, Chan, Yahl North Shore, who also declined to disclose the reserve.

In Gordon, a four-bedroom house at 10 McIntosh Street sold for $4.41 million to a family upgrading within the north shore.

Ten buyers registered to bid on the home, which had a guide of $3.5 million.

While bidding opened below that, at $3.1 million, it surpassed the guide and the reserve of $3.6 million, as four of the bidders competed.

“I can see they are nervous about the market response to interest rates, but they still bid up to $4.41 million …people are still willing to pay the value.”

In Petersham, a first home buyer bought a two-bedroom house at 105 Crystal Street for $1.39 million.

Seven buyers registered to bid on the 227-square-metre block, which had buyer feedback of $1.2 million to $1.3 million.

The auction opened at $1.15 million, and four of the buyers bid. The reserve was $1.36 million, adjusted from $1.4 million by the sellers who were making a sea-change.

'Living in a design museum': Inside Larry Emdur's Kangaroo Valley home for sale