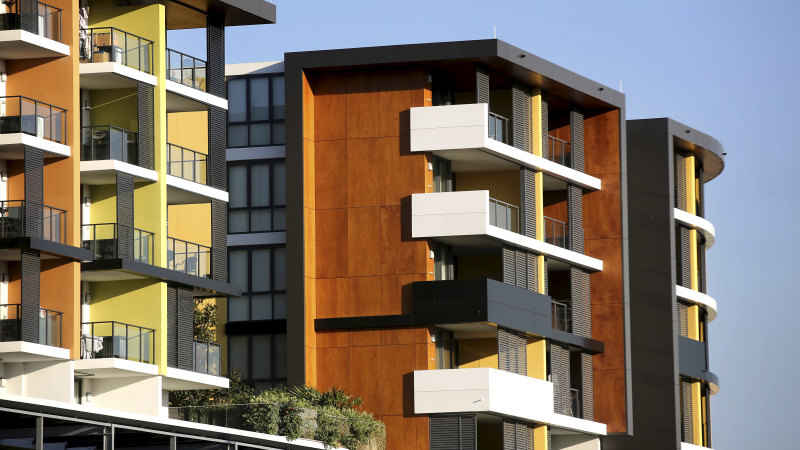 The price gap between houses and units diverged so far last year that many priced-out buyers will have no choice but turn to apartments.
Tawar Razaghi Jan 24, 2022
facebook
twitter
whatsapp
pinterest

Units are poised to pick up in popularity, as last year’s runaway house price growth is tipped to force buyers into more affordable properties and some investors jump back into the market.

But agents say buyers will favour units more in Brisbane than Sydney and Melbourne, where upgraders still vie for the keys to houses that offer more space.

There are a number of market conditions that should push unit prices up in 2022, according to Domain’s chief of research and economics Nicola Powell.

The price gap between houses and units diverged so far last year that many priced-out buyers will have no choice but turn to apartments, she added.

In contrast, the combined capital median unit price rose just 6.8 per cent to $609,642 for the same period.

“The dream of a first home has absolutely moved away from that quarter-acre block, the single detached house, it’s just not achievable when prices are exorbitant,” Dr Powell said.

“We’re likely to see unit prices grow. There is much more value and affordability in a unit.

“The affordability constraints are going to force buyers into units, as well as the fact we’ve got tight rental markets.

“We shouldn’t downplay what an apartment offers, while we pay a premium for space. I think apartments tend to cost less in terms of their upkeep and there are shared amenities.”

Driven by owner-occupiers and investors, the increase in popularity of units was in full swing in Brisbane, said Damian Hacket, chief executive of Place Estate Agents.

“It really has been Brisbane’s time. There hasn’t been a lot of price growth in the past eight to 10 years, and the gap between the average value of a home and average value of units will really see units come to the fore,” he said.

The announcement of Brisbane hosting the Olympics in 2032, albeit a decade away, has begun to bolster the apartment market too, he said.

In Melbourne, the unit market was slowly regaining some normality, according to Stephen Dullens, Ray White Victoria and Tasmania chief executive.

“There is a bit of a push of people coming back into the city,” he said.

Their Southbank office, the hardest hit during the pandemic with 200 rental vacancies at the peak, has only posted 30 vacancies in recent weeks, an encouraging sign for investors, he added.

While it was unlikely for families to buy into apartments unless they did not want to compromise on location, Mr Dullens said it would still be the first step on the property ladder for many first-home buyers and younger professionals.

However, in Sydney, BresicWhitney’s director Shannan Whitney was not convinced units would rise significantly in popularity or prices.

“Affordability on housing can be a factor but I also think the last cycle has been largely driven by owner-occupiers, and investors play a big role in the unit category,” Mr Whitney said.

Unless the investment landscape was more attractive, a major driver of apartment market growth, then units would not increase in price, he noted.

“Investors normally make up the apartment demand and investment demand has been relatively poor compared to owner-occupiers.

“Rents have been low and prices are high and there are still risks on the income side. It’ll be another flat year of property investment and that will have an impact on apartments.”

Previous Domain analysis found that Sydney buyers could find a two-bedroom unit for $166,000 less than a two-bedroom house of comparable size.

“[Buyers are] very much already there, more of us are living in apartments anyway.”

The best cities in the world to work from home