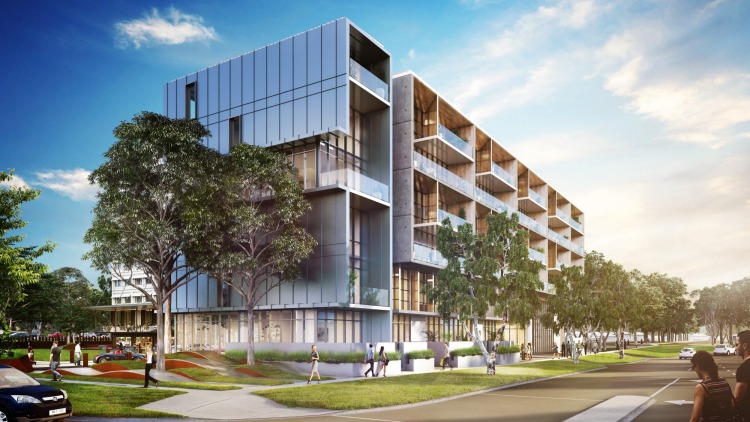 Midtown is being developed in Turner and will feature a 176-room Mantra Hotel, 26 apartments, office space and a range of cafes and restaurants. Photo: Scharp
Rachel Packham Jun 17, 2016
facebook
twitter
whatsapp
pinterest

Though construction of the light rail is yet to commence, it has already become a major influence on Canberra’s local developers.

HTI, the company behind the Northbourne Avenue development Midtown, described the light rail as the “catalyst” for their mixed-use precinct.

Midtown is being developed in Turner on the corner of Northbourne and Macarthur Avenue.

It will feature a 176-room Mantra Hotel, 26 apartments, office space and a range of cafes and restaurants, according to HTI director Adam Howarth.

“The light rail was one of the keys in our decision-making to purchase the site and then to grow Midtown into what it’s going to become,” Mr Howarth said.

“It’s really evolved with thinking about how we interact with the light rail.”

HTI director Jon Tanchevski said the light rail has also had a huge impact on the interest it has received.

“If the light rail wasn’t planned it would be a vastly different development than what we’re putting in now,” Mr Tanchevski said.

“We’ve got a really strong national tenant that’s here. We’ve had some inquiries already from local businesses that would like to start operating here and we’ve had some really strong interest from the residential apartments that we’re creating.”

Planning minister Mick Gentleman said it was “fantastic to see some of our local developers getting in early on what’s going to be a really sensational aspect of urban renewal for Canberra”.

Other projects on the cards for the light rail corridor include a residential development 92 Northbourne Avenue, which has reportedly sold to Geocon.

ANU’s Fenner Hall residents will be relocated from the Braddon building, which could also open up a prime development opportunity.

A number of public housing sites along Northbourne Avenue are also slated for redevelopment.

Mr Tanchevski said the light rail project has also been embraced by other local developers.

“Everyone is really excited about the opportunity that it provides,” Mr Tanchevski said.

“It’s a good platform for the city to grow and I think everyone wants to be part of that growth.”

Construction has already commenced at the Midtown site with the demolition of an office building and car park podium.

Mr Tanchevski said the site’s remaining office tower was a good fit for an adaptive reuse project and it will be converted into the hotel.

“[Midtown] is converting what is currently a bit of dead space and bringing life back into the area,” Mr Tanchevski said.

“We’ve tried to incorporate some of the well-planned design philosophies out of NewActon, plus also some little laneways that they have in Melbourne.”

The apartments will hit the market within the next few weeks and completion is expected mid to late 2017.

Endless summer: This effortlessly cool beachside mansion could be yours for $10 million

How to get your mortgage broker working harder for you

Five things to consider before buying a beach house