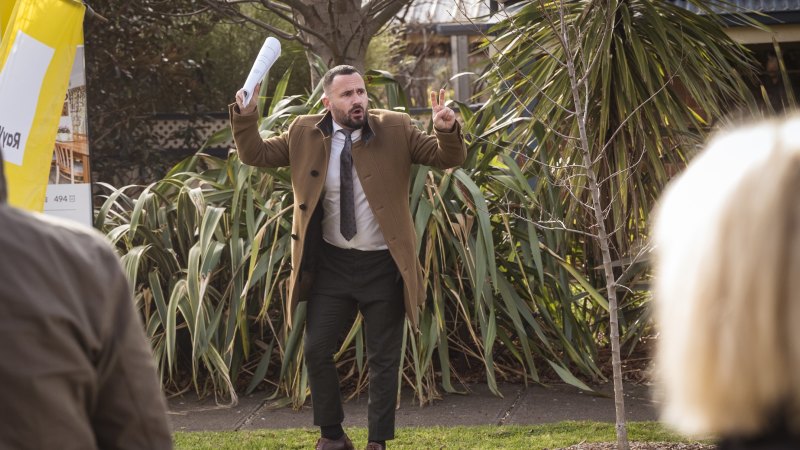 A Maribyrnong family home sold for $1.47 million at auction on Saturday, as real estate agents said some buyers were keen to make offers before any further increase to interest rates next week.

Two bidders competed for the stylish, five-bedroom home at 6 Riverbank Drive, a few minutes’ walk from the Maribyrnong River, pushing it just above the price guide of $1.35 million to $1.45 million.

Ray White Altona director and auctioneer Richard Anile called for opening bids from a crowd of about 30. The ultimate buyers, a Kensington couple with two children, made an opening bid of $1.3 million.

The underbidders, also a couple, kept the pressure on throughout, making counter offers even after saying they were not going to bid again.

The auction stalled at $1.455 million, but after consulting the vendors, the auctioneer declared the property on the market.

Ray White Altona selling agent Lyndon Springthorpe said the vendors, who built the home in 2000, were thrilled with the outcome.

“They’re ecstatic, they’re now making a sea change and have bought a place in Altona, and everyone is really happy,” Springthorpe said.

It was one of 523 auctions scheduled in Melbourne on Saturday, a quieter weekend due to the school holidays. By evening, Domain Group recorded a preliminary clearance rate of 54.9 per cent from 390 reported results, while 46 auctions were withdrawn. Withdrawn auctions are counted as unsold properties when calculating the clearance rate.

In Melbourne’s outer west, another five-bedroom home at 9 Brunswick Place, Taylors Hill also sold under the hammer for $960,000 after two bidders fought it out.

“There was a medium-sized crowd there, and I think that was because the property didn’t suit everyone’s needs,” Safatli said.

“School holidays or not, there are still buyers looking to buy.”

A three-bedroom Victorian terrace at 2 Langwells Parade, Northcote passed in and then sold for $1.205 million after a quick negotiation.

Nelson Alexander Northcote selling agent Tom Breen said the vendors had owned the property for almost 22 years and bought it for their children to live in while they attended university but no longer need it.

He agreed buyers were still out and about, despite the school holidays.

“People are still moving back from overseas and people are bidding, so nothing much has really changed,” Breen said.

Weekend Today Sat 02 July
Domain's Alice Stolz shares what you can buy in the world's most liveable cities including Melbourne on Weekend Today.

“Buyers don’t seem to be withdrawing – they could be trying to get in before interest rates go up again,” Sorrell said.

In Heidelberg Heights, a two-bedroom investment property at 55 Swanston Street sold to a first-home buyer for $674,000 – $14,000 above the reserve.

“As long as everything is priced well in the marketplace it will sell. Vendors have adjusted to the new market and there’s still competition for good properties,” he said.

One of the cheapest houses in Coburg North sold under the hammer on the weekend, with a first home buyer snapping it up for $690,000, well above the advertised reserve of $550,000.

Five bidders competed for the three-bedroom fixer-upper at 59 Williams Road, which had issues with its underpinnings and needed some major work, Ray White Bundoora selling agent and auctioneer Rayni Jerram said.

“The home was built in 1951 and this was the first time it’s been offered in 67 years,” Jerram said. “We are seeing a lot of people looking to get rid of their long-term family homes, there’s a lot of the older generation moving into retirement villages from what was their first home.”

Agents are encouraging vendors to sell now, rather than wait for the usually busy spring market, she said.

“We’re encouraging sellers to get into the market now as opposed to waiting for spring because there is always a really big influx of listings at that time and there are multiple interest rate rises predicted between now and then,” Jerram said.

Idyllic retreats: Eight luxury homes on the market across the country